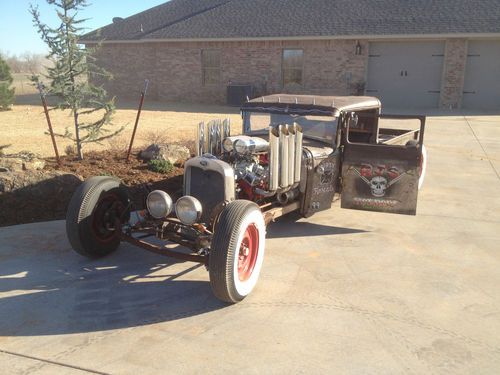 Up for sale is a 1931 Ford Model A Rat Rod.  It has a custom built stretch frame, a nice running 350 Small Block, 350 turbo tranny, Ford 9" rear end, custom built headers and chrome exhaust tips, brand new white wall tires, recently redone interior, diamond plate bed, beer keg fuel tank, screw driver door hinges, Jeigermeister radiator overflow bottle and much much more to list.  I have over $16,500 invested in this truck.  It has been the feature car in Rat Rod Magazine and the magazine comes with the car along with the build pics.  Everything on the car works and it runs and drives great.  This truck is a real head turner.  Feel free to call me with any questions or trade options (willing to accept trade offers) @ 580-799-2073 Jarrod