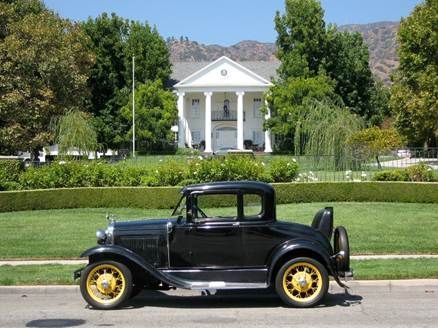 Condition: Used: A vehicle is considered used if it has been registered and issued a title. Used vehicles have had at least one previous owner. The condition of the exterior, interior and engine can vary depending on the vehicle's history. See the seller's listing for full details and description of any imperfections. ...
1931 Ford Model A Coupe
Unmolested, California Rust Free Survivor.
Rumble Seat, Wire Wheels.
Grandpa says: "King Solomon In All His Glory, Never Rode in a Finer Piece of Iron".
This 1931 Ford Model A Coupe is as nice a survivor as they get.
All Steel Body; No fiberglass!
Although the paint might be original, it has scratches and chips just as it should.
"Gear heads" remark that the "patina" is awesome!.This is not a Museum piece, but a really fine outstanding example of how a Model A should look and run.
Purchased from the second owner in 82 years, this Model A is as nice as you would want. The interior is vinyl and probably was restored 20 or 30 years ago. The drive train more recently.
All the gauges work perfectly. The charging system (generator) works as it should.
Brand new six volt battery. Wire wheels and tires are good. All the glass (windshield windows, glass windwings) are good. The chrome and bumpers, are exceptional!
The motor starts right up. Runs smooth. The transmission (3 speed) shifts fine.
No leaks.The brakes stop really good! The hand brake works good as well.
The floor board (original wood) is in great shape.
The radiator does not leak. The radiator cap is a vintage airplane with a  thermometer.The propeller spins as you drive.
The klaxon (ahooga horn) works too!
Has the original jack and tool kit (crank included).
No rust or rot at all! This is not a rusted out, fiberglass, East Coast, junk box.
This is an original, all steel body! This Model A is rust free NOT because it had rust repaired, it is rust free because it NEVER had any!
Comes with an original 1931 California License plate and a 60's registered, California Black plate.
Has a clean California Title. I really hate to see it go!
Because of it's age (82 years old), this Model A is being sold As-Is, without warranty, either expressed or implied. If you have any questions, please ask BEFORE you bid. Buyers are encouraged to inspect this Model A PRIOR to bidding.