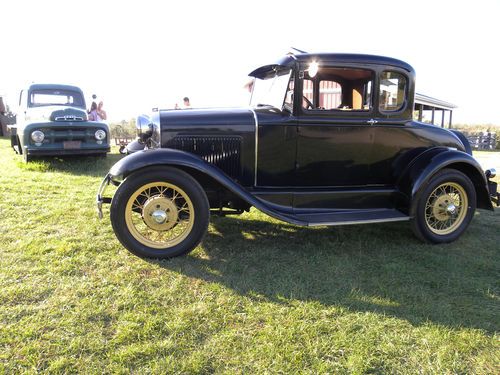 Condition: UsedA vehicle is considered used if it has been registered and issued a title. Used vehicles have had at least one previous owner. The condition of the exterior, interior and engine can vary depending on the vehicle's history. See the seller's listing for full details and description of any imperfections.Seller Notes:"This car is in great shape. However, it is over 82 years old. I try and show all the defects in the pictures. I believe this car has had an older restoration. There are some minor dents in the fender."

You are bidding on a great 1931 model A coupe 5 window that you can cruise with confidence.  My family has enjoyed this car for several years.  However, because of changes in our lives it pains me to sell but it has to go.  The pictures that are posted are of us taking a ride to an orchard near our home to pick apples.  This car rides and drives great, the orchard is approximately 25 miles round trip.  I purchased this car from a widowed women that had this car since the early 70's.  The research that I have done indicates to me that it has an older restoration that now has developed a great patina.  The interior is as close to original as I have seen.  Body mounts are in great shape, body is very straight with almost no rust.  The car also features break lights that increases your safety with this great driver.  There are a few things that do not work or are missing.  The odometer does not work so the actual mileage is unknown.  Also, the emergency break links are missing they are readily available on Mac's auto parts I have just never gotten around to getting them and are not necessary.  The shocks are all there but there are 2 that are missing the center link, they are also readily available.  If there are any questions or if you would like any additional pictures please give me a call 616.836.3424.