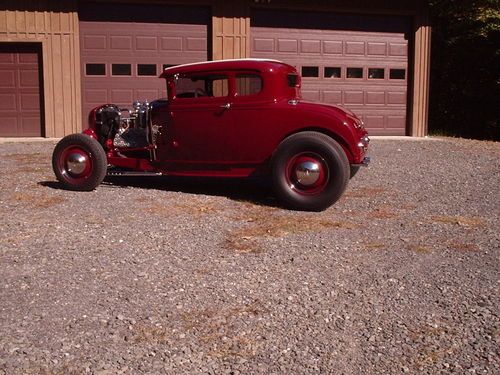 You can't get much more traditional hot rod than this beautiful car. This car was recently purchased with the possible intent of swapping out the flathead for a J2 Olds or early SBC we have but it is simply too well done and this flathead runs so sweet that it makes no sense. We'll start with another car rather than messing with this one. Starting out with a very nice Canadian body that was chopped 5 inches a complete new floor was installed with the correct sills to match the 32 frame rails. The body is also using a heavily modified 37 truck grille, 38 Ford dash, passenger cowl vent and 1950 Buick tail lights. Inside is gorgeous rolled and pleated leather interior with lots of extra material for future modifications that might be desired. This interior was done by a well known and respected professional upholstery shop. This is one of the most well done A-V8 projects I have ever seen and one be hard pressed to find a nicer one. The frame begins with new 32 rails that are fully boxed, narrowed to fit the A body, have A crossmembers front and rear and a very nicely done center crossmember with lots of triangulation. Rear is a 9" posi with Dutchman axles and 3.70 gears on the A spring with ladder bars. Front is all chrome Superbell with Wilson Lincoln brakes using Buick aluminum drums and cowl steering. The engine in this beauty has got to be the sweetest sounding flathead you have ever heard. It is a .040 over 255 Merc ported, relieved, 1007B cam, new valves, springs, lifters, oil pump, etc. It employs Evans heads, Weiand tall intake, new Super 7 Strombergs, Bubbas' Chevrolet distributor, rebuilt starter and generator. Transmission is a rebuilt S10 T5 that works very well. This A also uses an Odyssey battery, an aluminum fuel tank and 16" Ford wheels, caps and trim rings. Also included is a painted, rewired and period correct heater that is that has already been modified to fit the firewall of this car. This gorgeous A starts, stops, runs, drives very well and a stack of receipts an inch thick is included along with one of the magazines the car has been featured in. A note of caution for the sake of full disclosure and complete honesty. The original 38 speedo in this car cannot be connected as the T5 is the electronic style and in order to connect to a cable the transmission must be removed and the tail shaft housing replaced with the mechanical speedo type. The drive gear is on the shaft however. The vintage tach in the dash will possibly need a control box to operate or revision to modern internals. Title is a clear and open PA title and the car is titled correctlyas a 1930 Ford.