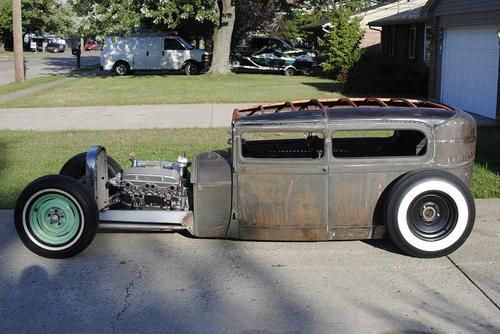 Condition: Used: A vehicle is considered used if it has been registered and issued a title. Used vehicles have had at least one previous owner. The condition of the exterior, interior and engine can vary depending on the vehicle's history. See the seller's listing for full details and description of any imperfections. ...
1929 Ford Model A tudor sedan
Built by Sinister Image Rod & Cycle
Up for auction is this well built tudor sedan project that has all of the hard work complete, and now needs you to finish her up with your options and color choices and personality.
The tudor sedan body features a 6" chop, and is channeled 4" for that long and low look.  Hand built roof wood kit right here at the shop.
The frame was hand fabbed right here at "S.I.C."  It features a suicide front end, with a 4 3/4" "Z" and a pie cut front rails with 7 degrees of taper for good handling characteristics.
The rear of the frame is Z'd 15" to allow the ford 9" rear end clearance so the frame and body will lay parallel with the ground when layed out.  The rear suspension is a parallel 4 link setup for air bags.  The air bags and mounting brackets are also included with the car.
Front suspension is all new Speedway Motors 4" drop axle, spring over and wishbones with disc brake kit.  Not all parts for brake kit are shown in photos but will be included with car.
Front wheels are off of a 56 ford f-100, and front tires are shop rollers.  Rear wheels are new Cragar delux 69 with new H78-15 Coker wide white walls.
Installed between the frame rails is a good running 350 chevy crate motor featuring 4 bolt main caps and an aluminum short water pump.  Backed by a smooth shifting 2004r overdrive transmission.
Pinstriped by Mr. Oz designs on cowl and rear of car.  Grille shell and visor are from a 1931 model A.
This car will come with an Ohio title.  There is a small issue with the title, but should be able to be resolved.  Contact us for details if this is a big concern.
For trade offers or any other questions or concerns feel free to email us here and we will be happy to answer any questions you may have.
Car may be sold as a roller meaning if you do not want engine and trans, we could pull them and sell it as a roller.
Non refundable $500 deposit due within 48 hours of auction end.  You may use paypal or pay up cash!
Thanks and happy bidding