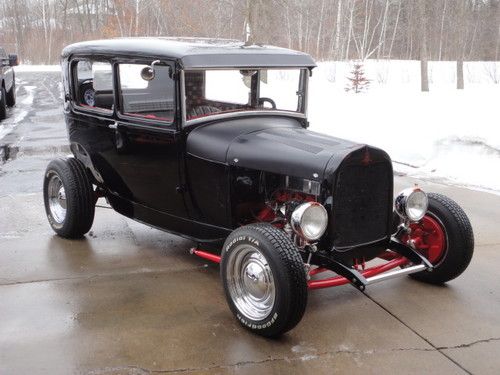 Lets go cruzing. This is a fresh build that started out with a new 32 Ford Frame and was narrowed to match the body. Late 40's front end with a 8" Ford rearend. Drum brakes all around with transverse leafs and all chrome shocks. Vega crosslink steering. Rebuilt GM 4 banger with headers and 4 barrel carb with chevy blazer 4 speed trany. New hydraulic clutch. Solid all steel original Henry Ford steel body with filled roof. All new glass and door handles and latches,Aluminum fuel tank. Louvered hood. New chrome wheels with BF Goodrich radial tires. Interior is all done and new with all new guages and front seat belts. Call with any questions or offers or partial trades for model A-B speed parts. The reserve on this car is low and priced to sell. Mark at 320-251-9484