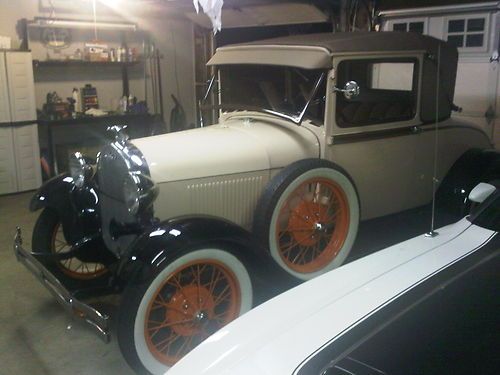 Beautiful 1929 Ford Model A Sport Coupe with rumble seat.  I bought it already restored.  They did body,  engine and drive chain, upholstery, wiring, brakes, etc.  I fine tuned these things to make it a great car to drive around.  Its just about as good as when Ford made it.  I resealed the engine and transmission, adjusted the brakes, put in a new battery and got four new tires.  There are a total of 7 tires with rims.

It has added LED left and right blinker and emergency flashers installed in between the bumper bars.  Also a perfect dove on the radiator, a radiator stone guard, step plates, a leather trunk with trunk rack and a rumble seat in the back.  It has rare dual fender tire mounts in the front.  The paint is like new and shiny (The photo has dust on the paint).  Its a real head turner with its black fenders, tan body, brown wide stripe with red pin striping that matches the wheels.  You will also receive a box of extra parts, the motor crank (Only for when the battery is dead)  and an owner's repair manual.