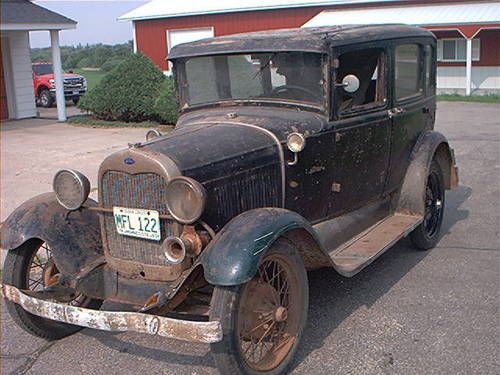 1929 Ford Model A Murray 4 Door Town Sedan.  The car is all original condition.  It has been in storage since 1965.  The body is in very good condition.  The body is 99% rust and dent free.  The fenders have a few small dings and the right fender has a clean crack.  The body wood is all good and the top bows are all good and all of the wood is original.  The original top is intact and has been coated.  The original interior is in the car but is rough.  All of the glass is good except the right rear door glass has a crack.  The car is 99% complete and original.  The car has had a brush paint job and that is about it.  It is the Murray body 4 door with the original tag on the right cowl and inside the right front door.  The floor pans are nice and have no rust through.  The wheels are original 21 inch and have tires that hold air.  The rear cushions are there for the car with the original upholstery.  The front seat is there with no springs.  The motor runs good.  The car shifts good and stops good.  The radiator, gas tank and motor have no visible leaks. The original shocks are still on the car.   I have clear Minnesota title for the car with matching numbers on the engine. I also have an original front bumper for the car.   This vehicle is being sold as is with no warranties.  The buyer is responsible for making arrangements for shipping and for all the shipping costs.  We will help load the vehicle at our location. Please email us for more pictures or if you have any questions.