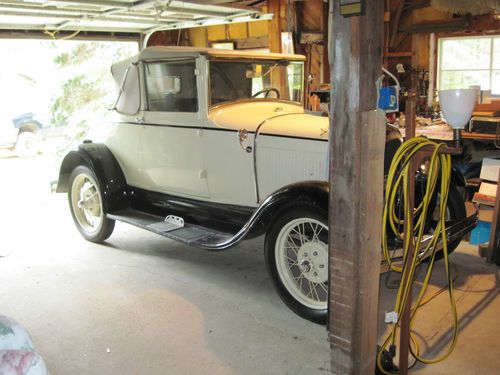 YOU ARE BIDDING ON A 1929 FORD CABRIOLET MODEL A.  THIS CAR IS A PALE YELLOW WITH BLACK FENDERS. THE INTERIOR IS BROWN. THIS CAR HAS A RUMBLE SEAT BUT THE SEAT NEES TO BE RECVOVERED.  THIS CAR OVERALL SEEMS TO BE IN VERY GOOD CONDITION. PLEASE LOOK AT THE PICTURES. THIS CAR IS RUNNING AND DRIVEABLE. I AM SELLING THIS CAR FOR A LOCAL ESTATE. THIS CAR IS IN MAINE AND CAN NOT BE SHIPPED AND WILL HAVE TO BE PICKED UP. YOU WILL NEED TO PAY A 500.00 NON REFUNDABLE DEPOSIT WHEN THE AUCTION IS DONE AND PAY THE BALANCE WHEN YOU PICK UP THE CAR. YOU WILL HAVE TO LET ME KNOW WHEN YOU WILL PICK IT UP SO I CAN MAKE ARRANGEMENTS WITH THE ESTATE. PLEASAE ASK ANY AND ALL QUESTIONS BEFORE BIDDING AND I WILL DO MY BEST TO ANSWER YOUR QUESTIONS BUT I DO NOT KNOW MUCH ABOUT THIS TYPE OF CAR.