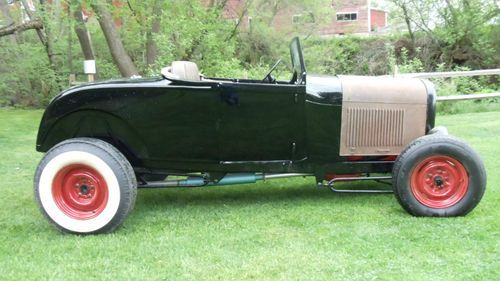 Condition: UsedA vehicle is considered used if it has been registered and issued a title. Used vehicles have had at least one previous owner. The condition of the exterior, interior and engine can vary depending on the vehicle's history. See the seller's listing for full details and description of any imperfections.Seller Notes:"In description"

Up for bids is my Real steel 1928 Ford Roadster hotrod .  This Car is an original steel body, on a fully boxed real 28 frame.  The motor is a 59A Ford Flathead, with the matching 3 speed trans.  It has a GM 7.5 inch rear end with I believe 2.73 gears.  Here are some specs on the car:

All new Drum brakes in rear

nice new tires all around

This car still needs a few minor things to be roadworthy.  The car needs brake lines installed, and needs interior done. The lower firewall and the floor where the trans tunnel is  fiberglass.  There is also some fiberglass patching around the inside of the trunk lid.  It does have a seat in it but that's it.  There are probably a few things I have missed.  Please ask questions and I will answer them as good as I can.  Feel free to call me (802) 222-1863 before 9:00 est.

This car is a really good start to a kick ass hot rod!  Its almost done!  These cars finished are 20k plus!  This car could be cruising down the road with a weekends worth of work.

I will consider offers and reserve the right to end this auction at any time.  A $500 Non refundable deposit is due within 24 hours of auction end.  Thanks and happy bidding!