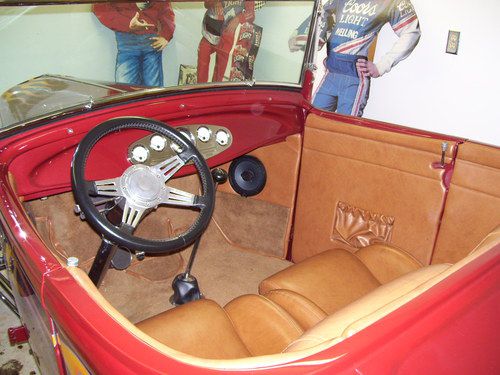 THIS IS A BEAUTIFUL 1928 FORD ROADSTER. CAR WAS APPRAISED AT 41,500.00 DOLLARS. IT IS AN ALL STEEL BODY WITH A 289 CI. FORD SHELBY COBRA V-8. IT HAS A C-4 AUTOMATIC TRANSMISSION.  IT HAS ULTRA TAN LEATHER WHICH IS IN EXCELLENT SHAPE. CHROME IDIDIT STEERING COMUMN, LA CARRA STEERING WHEEL. CHROME DROPPED FRONT AXLE AND CHROMED REAR AXLE AND CHROMED DRUMS. THIS CAR IS A MANY SHOW TIME WINNER AND HAS QUALITY SHOW PAINT AND FLAMES. SELLING PRICE 35,500. CONTACT JIM