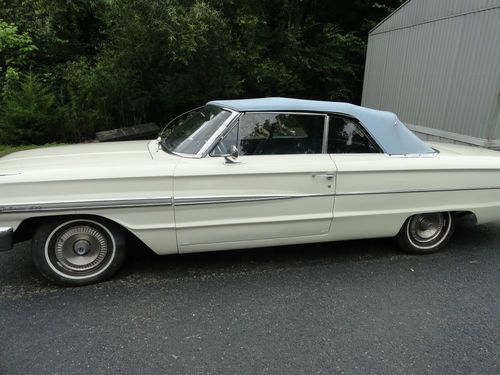 SUPER NICE ALL ORIGINAL 1964 WIMBLEDON WHITE GALAXIE CONVERTIBLE.  THIS ONE COMES EQUIPPED WITH THE ORIGINAL 289.  THE BODY IS FAIRLY STRAIGHT AND IT HAS VERY LITTLE RUST.  THIS CAR WAS PRODUCED AT FORS'D LOUISVILLE PLANT AND SOLD AT A CAR DEALER IN INDIANAPOLIS, INDIANA.  THIS ONE NEEDS A SET OF TIRES, A GOOD CLEANING AND MAYBE A TUNE -UP TO BECOME A PERFECT SUNDAY DRIVER.  PLEASE ASK ANY QUESTIONS AND I WILL DO MY BEST TO ANSWER THEM.  CAR IS FOR SALE LOCALLY SO SELLER RESERVES THE RIGHT TO CANCEL AUCTION.

CAR IS SOLD AS IS- WHERE IS BUT SELLER WILL ASSIST WITH SHIPPING ARRANGEMENTS.