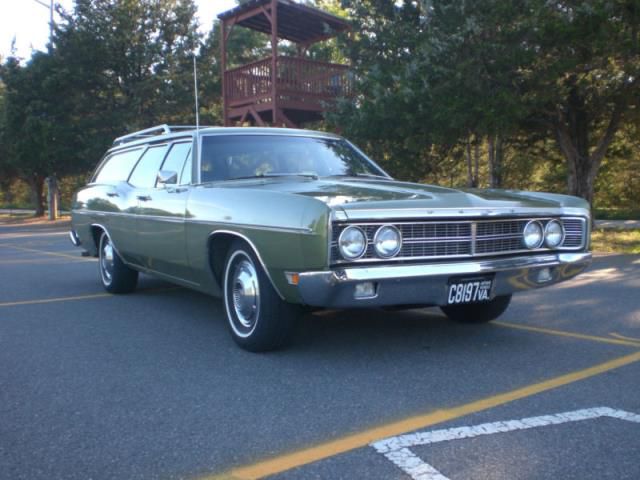 A 1970 Ford Galaxie Country Sedan. This wagon was manufactured in Ford'sLos Angeles factory and made its way to Virginia through owners in Oregon, Ohio,and Michigan. A well maintained wagon with 82,000 miles. This car has NOT beenrestored -- rather, it has been carefully preserved and still wearing itsoriginal 'Ivy Green' paint and matching interior. It is a base modelwith bench seats. Options from the factory were limited to the power assisted steering, servo brakes, and the electric rearwindow. The tailgate is of the 'three position' type: swing open withthe glass up, swing open with the glass retracted, and drop down with the glassretracted. The updates to the car include radial tyres, four audio speakers, andhalogen headlamps. While the original AM radio has been modified internally tonow receive both AM and FM stations, it retains its original factory appearance.A custom fitted dash pad is installed. There is a gauge cluster under the dash(picture 10) that is equipped with a voltmeter, oil pressure gauge, and atemperature gauge. A towing package has also been fitted and includes atransmission cooler as well as a tow bar/receiver with a seven pin The air conditioning works extremely well and has been upgraded toR134. Original sales brochures, shop manuals, and period literature areincluded. Noted flaws are wear marks on the steering column near the ignitionswitch and a crack along the radio speaker perforations on the dash