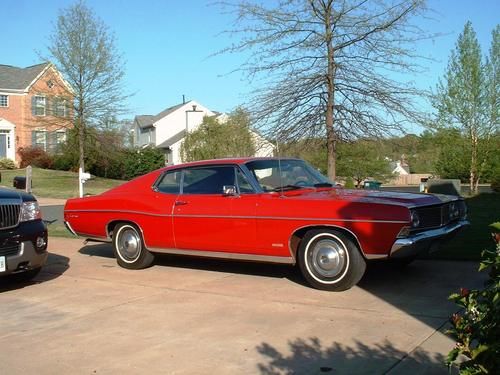 Condition: UsedA vehicle is considered used if it has been registered and issued a title. Used vehicles have had at least one previous owner. The condition of the exterior, interior and engine can vary depending on the vehicle's history. See the seller's listing for full details and description of any imperfections.Seller Notes:"The car is in great condition with few exceptions, please detailed description in the add."

1968 Galaxie 500 Fastback. The car is in great condition with few exceptions, from the pictures you can see that the front
drivers and passenger seats are in need of repair and the dash has cracked near the radio speaker. The base 1968 Galaxie came
with 302 V8 and 2bl carb, as you can see on the original build sheet the owner selected the larger 390 V8, at the time of order
The original owner had installed Sears Air shocks on the rear and an 8 track cassette player, that is in working order. I have
completely replaced the brake system, master and wheel cylinders, all new brake lines and shoes.  I rebuilt the carburetor, and
installed an oversize fuel filter.  This car has no rust but has one small scratch (paint chip) on the upper drivers door.
When I purchased the car the owner stated that the miles were accurate and the odometer now shows 43,175 miles.
If you have any questions please do not hesitate to ask.  The vehicle is located in Virginia and must be picked up at my
location.