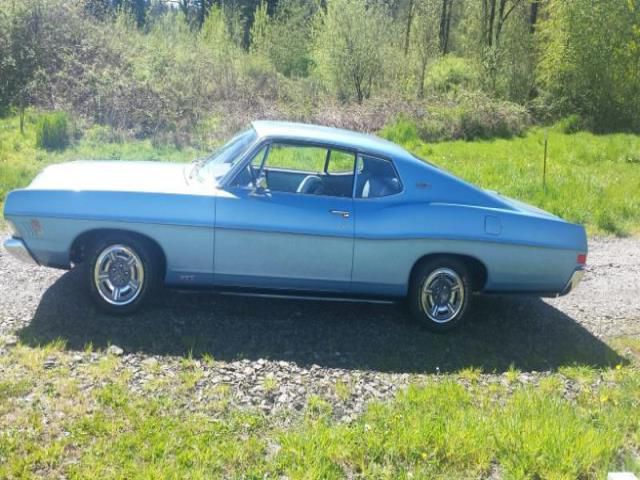 Here's a Gorgeous and Original Galaxie XL Fastback Hardtop from deceasedowner's estate..He was a FOMOCO collector, Mercurys and Fords. And a localneighbor. This is a totally rust-free car built in the Los Angeles plant thathas only 47,998 miles. You can see under the valve cover in photo that there isvery light oil buildup. She has had a nice high quality/ high $ base coat/clearcoat 2 stage paint job that has been color sanded and buffed to a beautifulluster. Car codes for medium blue metallic..code Q. It was hood and rear deck lid, the door jambs and engine bay allpristene and better than factory in my opinion. It has GT rocker stripes andfine double belt line pin striping. The interior has been redone in the factorycorrect Blue(code RB) vinyl with the pebble grain inserts. The door panels areoriginal with no rips,tears but do show some minor fading at top..not bad. Newcarpet and headliner along with the rear shelf have been installed. New doorweather stripping and trunk seals have been installed. original window felts aregood but a brand new set is included still in the box. the trunk is correctfinish with original restored jack. The bumpers are new and other chrome isoriginal with some minor wear. Fastback and XL trim is hard to come by sooriginal items have been used in the restoration. This car is very presentable.Has power disc brakes and power steering..The carburetor has been some minor tweeking at idle but starts excellent when cold and idlesdown..new plugs and wires have been installed. Also a new and battery.The engine bays is very tidy, clean and presentable. Thevacuum headlight raise and lower as they should along with high and low beam andturn signals. she ha
Please contact me only at : nevileschoenbach@yahoo.com