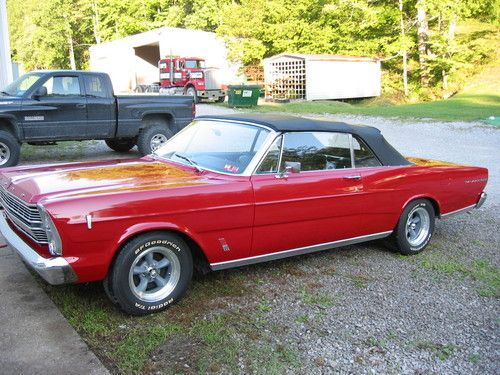 1966 Ford Galaxies 500 convertible mostly original with very low miles.  I am the third owner and need to sell just do not have time to drive it anymore.  The car has been garaged all its life and out of the elements.  The car has the original drive train that is a 390ci 2 barrel carb with a c6 automatic.  The car is factory power steering with manual drum brakes at all corners.  The car has a power top with a true back glass (not a plastic window). The interior is all original in black the top was replaced by second owner in the 80s.  He also had the car painted red the original paint color you can see under the scuff plates. I have installed a secret audio radio with speakers under the front bench seat, put a factory style dual exhaust, and installed the torque thrust wheel and tires.  The factory hub caps will go with the car.  Any other questions feel free to ask me.

I would prefer to have the buyer pick up the car, but I will help the buyer ship at your cost and payment of car must be completed first before shipping.  Buyer responsible for all shipping costs.
I will accept cash, money order, bank check, certified check, or personal check once cleared.  Car will not leave till payment is accepted and cleared.
Payment of $100 thru PayPal by winning bidder at end of auction.
I reserve right to end auction at anytime. Car is for sell locally also.

someone asked about door tag here it is