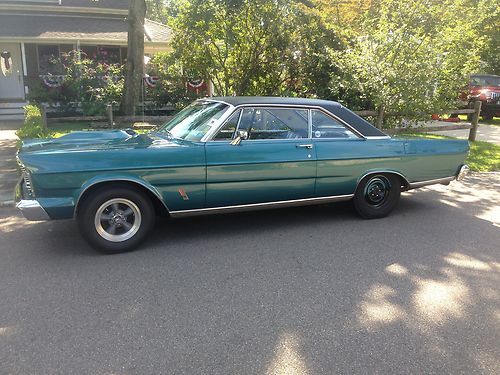 1965 Ford Galaxie 500 XL purchased new from Ronkonkoma Ford in Centereach, NY in 1965, garaged from 1976-2004( car still has 1977 NYS inspection sticker on windshield). Car completely stripped and repainted with new replaced vinyl top. Originally a 390/300 with a Top Loader 4 speed, motor pulled in 1972 and replaced with a 428 Cobra Jet from a 1968 Shelby KR500, oil pressure over 100 p.s.i., motor balanced and blue printed in '72 with a 600 lift cam/ 300 duration,  Mallory ignition and Mallory coil. Holley double pumper carb, Enson scatter shield, homemade 10 Qt. low sump oil pan, .457 Ford Nine inch with Detroit Locker, homemade ladder bars with brand new Moroso shocks: 90/10 up front and 50/50 in rear. Brand new pie cutter Hurst slicks purchased summer of 2012, new front bias ply G78 for that nostalgic look, original Rotunda tach Ford Factory ordered with car in '65. Headers and exhaust replaced in 2005 with cutouts added in 2012, Interior is completely unmolested. There is no body filler or plastic in any panels, car never rained on since 1976. Engine compartment cleaned and repainted, New 4 core aluminum radiator , car runs at 180 degrees on the hottest day of the year. All chrome either polished or replaced. Car has original white headliner that is almost perfect. Car has been in and around my family since purchased new in '65. I know entire history of car from original owner. I have names of mechanics who made oil pan, ladder bars and the owner of the '68 KR500 Shelby where the motor originated. This car was raced from 1971-1973 at Long Island Dragway in Westhampton. Old race stickers put under the hood and painted over by previous owner. I have additional pictures of car. This Ford will not disappoint and is one true survivor! Serious inquiries only!