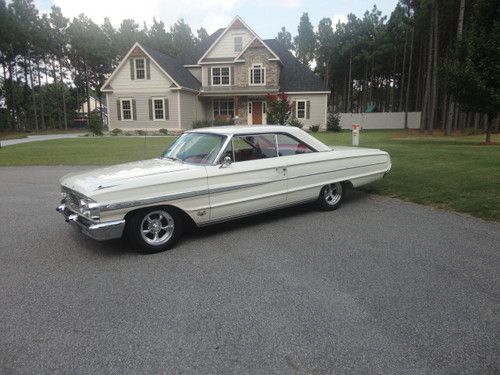 FOR SALE IS A NICE 1964 FORD GALAXIE FASTBACK P CODE WITH A 390 POLICE INTERCEPTOR ENGINE AND A 4 SPEED TRANSMISSION AND A NEW SET OF TORQUE THRUST WHEELS AND NEW TIRES.. CAR RUNS AND DRIVES GREAT AND IS A GOOD CRUISER.. THE OWNER JUST BOUGHT A 2004 MACH 1 AND NEEDS TO SELL THE GALAXIE CAUSE HE DON'T HAVE THE GARAGE SPACE FOR BOTH CARS.. CAR IS IN GOOD DRIVER CONDITION.. NOW FOR THE BAD THE FRONT SEAT HAS A SMALL HOLE IN IT AND WILL NEED TO BE RECOVERED AND THE TRANSMISSION WILL JUMP OUT OF 3RD GEAR SOMETIMES AND WIL NEED A 3RD GEAR SYNCHRONIZER OR THE OWNER HAS ANOTHER 4 SPEED THAT COMES WITH THE CAR.. FOR MORE INFO CALL CHARLES 919-545-6496