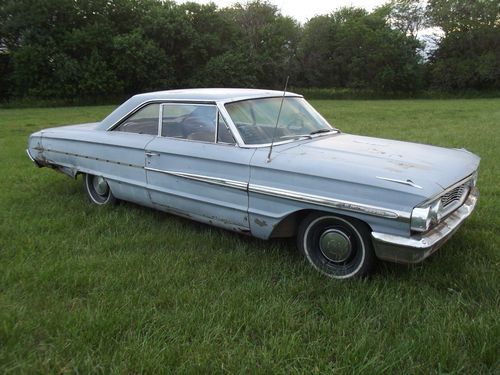 Condition: UsedA vehicle is considered used if it has been registered and issued a title. Used vehicles have had at least one previous owner. The condition of the exterior, interior and engine can vary depending on the vehicle's history. See the seller's listing for full details and description of any imperfections.Seller Notes:"Trunk pan is rotted. Gas tank is rotted so there is a fuel cell in the trunk. Quarter panel was crunched by previous owner losing control, going in ditch, and hitting tree stump. No accidents!"

Up for sale is a great running, driving, restorable muscle car only around 1,400 of these were made with the Z code package according to Galaxie Club of America. This car is fairly original with its original engine 300hp 390 police interceptor & original interior. The rearend is also the original "posi" but has a 3.89 gear, car originally had a 3.00. Top loader 4 speed is out of a 1967 Fairlane 390 car. I bought it from the second owner who said he changed the gears bolted on slicks, and broke the T-10 that was in it but kept the original Galaxie shifter. Now for the body, its a little rough. Floor pans are good but trunk pan is rusted and so is the back bumper. Also has a little rust in passenger rocker and needs 1/4 panel. This is a Z code car and has a good clean title and definitely worth restoring. Take a look at some restored ones and there prices. Please bid seriously and bid to win. Good luck! I can also help arrange shipping and possibly deliver for extra money.