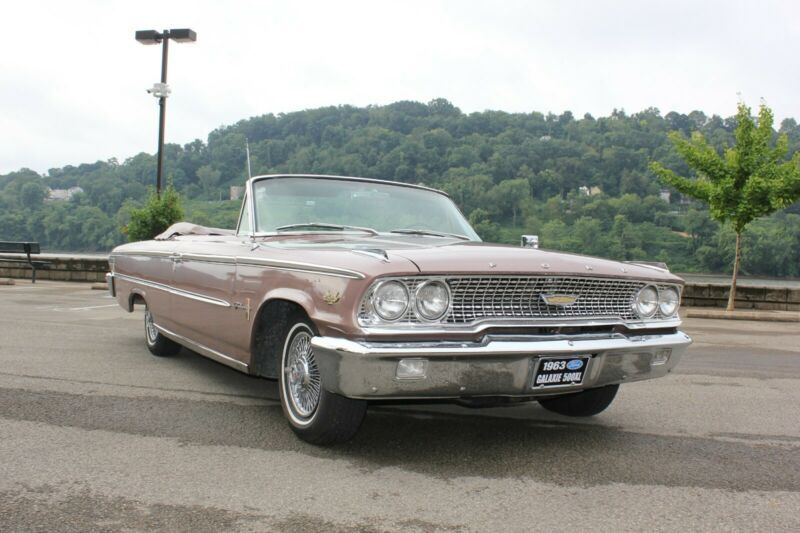 This beautiful ’63 has the 300 HP 390 Ford FE Z-code engine. Above and beyond that, it is outfitted and upgraded with with some 406/405HP G-code goodies! Like a G-code 406 this XL 500 has a 6V Triple Holley 3×2 induction (tripower)
and cast iron 406FE headers. This car runs and sounds like a true HIPO car. The 390 barks through its dual
exhaust. Shifting gears is a dream with the smooth shifting tough Borg-Warnder t-10. If you haven’t been behind
the wheel of a 390 or bigger FE 4-speed Galaxie, you would be surprised how well they run. These cars can hang
with the sporty pony cars with no issues. AC blows cold! The long block is still original to the car. C3AE heads and engine block do have the correct date code. The engine is very strong with the only modifications being the hipo 406 intake, exhaust and electronic ignition.

Exterior: The Rose Beige paint shines nice. The car has been repainted the original code W color. There is no
evidence of cracks or rust. The bumpers and emblems look great. The aluminum trim is all there, some could use
restoration if you want the trim to be at a show quality level. The paint measures pretty consistent across the
car. There has been some body work done to the rear quarter-panels behind the rear tires. The work appears to be
of high quality and there are no signs of cracking or issues. The convertible top has been replaced and is in good
shape.
Interior: All original upholstery, dash pad and door panels are in good shape. The carpet appears to be replaced
however it is in OEM quality carpet set. All of the glass, door handles and dash components are in nice shape. The
air conditioning works, all of the gauges work, all lights work. The clock is intermittent.
Mechanical: The 390 is very strong and very fun with the 6V(tripower). The 4 speed adds to the excitement, it
shifts smooth like a T-10 should. The car steers super easy, rides nice and stops well! Data Tag Breakdown:
Body – 76B 2-Door 500XL Convertible
Color – W – Rose Beige
Trim – 80 – Lt. Rose Beige D/L
Date – 29C – March 29th, 1963 (Build Date)
Axle – 5 – 3.50:1
Trans – 5 – 4-Speed Manual-Shift
Engine – Z – 390 300 Horsepower