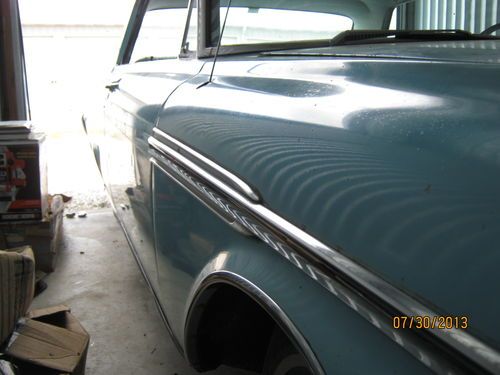 Condition: UsedA vehicle is considered used if it has been registered and issued a title. Used vehicles have had at least one previous owner. The condition of the exterior, interior and engine can vary depending on the vehicle's history. See the seller's listing for full details and description of any imperfections.Seller Notes:"Solid '62 Galaxie 500 XL,FE big block,factory air."

'62 Ford Galaxie 500 XL  2dr.ht.,ran last year but is not running now to due ignition and or electrical problems,I do not have time or a place to sort it out. The floors,trunk,frame,and inner fenders are all solid! The body only has minor rust and light frontal damage (see pics). Some trim is off but I have it and most of it is nice,it's possible a couple of pieces could be missing,but most of it is here. I don't have a front bumper and the grille is slightly beat up,a couple of headlight bezels are pretty beat up too. When it was running it went good in reverse but would barely move jn drive,but the engine seemed great. The glass is all very nice (factory tinted windshield). Steers and stops fine. Write with any questions. Thanks,Paul