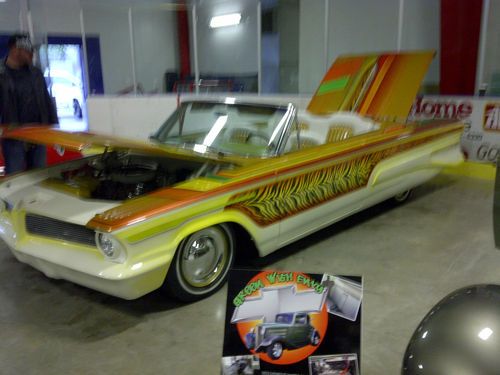 For Sale is a wild fully customized 1963 ford galaxie 500 convertible,known as the GOLDEN GALAXIE. i bought this car sight unseen last easter and never met the owner and restorer,but i have found a bit of history on the car. it was apparently built as a show car in the 60's made the rounds as a show car for a few years on the west coast and then went into storage for many years.about 5 years ago it was found and a restoration started.here are as many details as i can think of, starting at the front and working to the rear:

front bumper molded to front sheet metal...
62 pontiac front grills molded in, all work done with metal
62 pontiac single headlites...
62 pontiac hood lip molded to ford hood to complete the pontiac theme on the front end...
under hood;
front rad support molded in to fenders etc..
power steering,new power disc brakes ...wilwwood disc conversion..
NEW ford 390 crate motor,less than 100 miles on it..
........has new water pump fuel pump generator,carburetor.edelbrock 650 elec choke.
weind intake manifold.
chrome air filter and valve covers.
ceramic coated exhaust manifolds,cooling fan,pulleys,timing cover...
trans cooler,recored radiator,
rebuilt cruiseamatic trans.
rebuilt 9 inc rear end unknown ratio.
new windshield
new full custom gold metalflake and pearl white interior. feature mustang buckets and custom built consul.
new carson style lift off canvertible top. made with the stock folding top mechanism. easily converted back to stock foldin top.
custom rear seat deck lid  ala tbird roadster.
fully finished and carpeted trunk.
frenched 63 galaxie tailights.
molded rear bumper into extended and wild rear quarterpanels with custom flush mount fenderskirts.
molded frenched rear dual exhaust outlets.
and to finish the 60's theme lake pipes and dummy spotlites
THE PAINT
features over 25 colors done in every style you can imagine
metalflake, flames,panels,scallops, lace, stripes.fogging, free form and much more.
ALL REALLY WELL DONE.
the top half of the car is very good,the lower half is good but not like the top.tipical of the way things were done years ago
to replicate the paint and body work at todays rates would be crazy. well over 50,000 dollars.
if you like attention and love to talk cars this is the one for you, draws huge crowds everywhere it goes. if interested and want more info email and i will send my ph number. this car is for sale locally and could be removed at any time .i have a reserve and an asking price .
feel free to contact me for honest answers to your questions as this car will sell at such a low reserve  there is no need to lie about it
will ship anywhere at buyers expense will help load or whatever to help out with shipping
this is a fresh restoration has only been driven aprox 100 miles enough to work out the bugs that might show up
this car is currently registered and insured in sask and can easily be exported to the usa