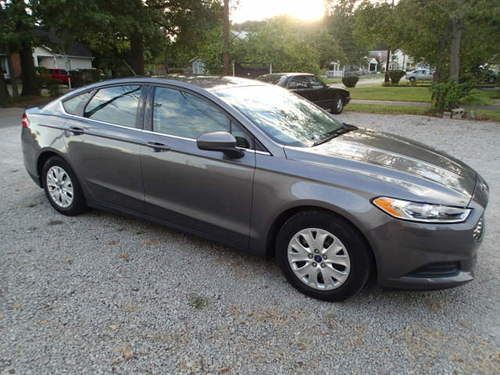 Hello you are bidding on a super nice 2013 Ford Fusion S with 6,067 miles. The car runs and drives great. The car sustained fresh water damage to the floorboard area of the vehicle. The vehicle only had about four inches of water in the floorboard. We drove the car home 100 miles from the insurance company storage lot, super nice car. The airbag light is on, that is because the airbag module under the carpet got wet, to get the light off you will need to replace the airbag module. To be perfect the carpet will need to pulled and dried. But the car is functional in it's current condition. There was no water in the engine or tranny. Car drives great. The cars exterior is super nice, the cars interior is also very nice. The car is available for inspection please feel free to contact us at 502 817 2972. The car is being sold as is damaged with salvage title. I can get a rebuilt title if you are interested after sale is made. The car being sold as is.

AS IS DAMAGE DISCLOSURE
We are a family owned business since 1954 same location for 57 years. All of our cars sold as is damaged. A lot of the wrecked vehicle we sell are crashed but still assembled, there are a lot components that maybe damaged that we can not see. We start all vehicles, and see if they can drive, we specify if you can drive them home our lot drive. We do our best to specify which parts are damaged and if the vehicle has frame or structure damage. We list all the damaged items in our add so make sure you read the entire ad there maybe some items listed that you can not see in the pictures.On flood cars I am not responsible for any thing that stops working or any other issues. We are also not responsible for keys or key fobs losing program. You need to remember you are buying a wrecked car, not a fully functional vehicle in most cases. Please ask as many questions as you like, we will be glad to answer any of the questions you have. You are more than welcome to come by our shop and inspect the vehicles in person or send a representative to inspect the car for you. All vehicles sold as is, we are not responsible for any unseen damaged parts or unseen damaged areas.  We are not responsible for  carfax, or auto check reports of vehicles while they are for sale by us or after the vehicles are sold.