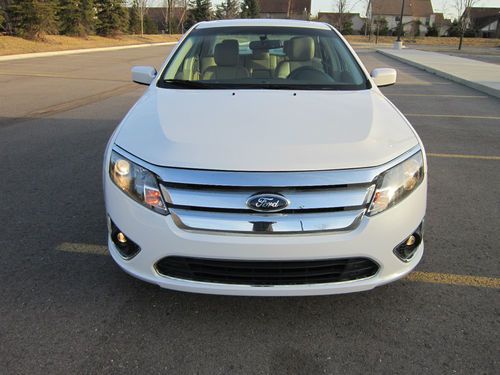 Condition: Used: A vehicle is considered used if it has been registered and issued a title. Used vehicles have had at least one previous owner. The condition of the exterior, interior and engine can vary depending on the vehicle's history. See the seller's listing for full details and description of any imperfections. ...
2012 FORD FUSION
WANT TO GET VALUE FOR YOUR BUCKS? THEN THIS 2012 FORD FUSION SEL WILL BE THE ONE FOR YOU. COMPLETE PACKAGE OF RELIABILITY-COMFORT & DURABILITY. THIS FUSION IS LOADED WITH CONVENIENT FEATURES FROM BUMPER TO BUMPER. 2.5 LTR GASOLINE ENGINE WITH AUTOMATIC TRANSMISSION FOR BETTER GAS MILLAGE. WITH THE VERY LOW 9K MILES ON IT, LOOKS AND DRIVES LIKE BRAND NEW. IT HAS GOT A REBUILT TITLE DUE TO AN ACCIDENT. THE DAMAGE WAS IN THE FRONT DRIVER SIDE AND ALL THE REPAIRS HAS BEEN DONE PROFESSIONALLY. MICHIGAN STATE INSPECTION IS DONE AND TITLE+VEHICLE READY TO GO.
FEATURES LOADED:
*** HEATED LEATHER SEATS
*** POWER SEATS
*** 17 INCH ALLOY WHEELS
*** POWER SUNROOF
*** SYNC POWERED BY MICROSOFT
*** CONTROLS ON THE STEERING WHEEL
*** CLIMATE CONTROL
*** 7 COLOR AMBIENT INTERIOR LIGHTING
*** SONY SOUND SYSTEM
*** KEY LESS ENTRY WITH NUMERIC KEYPAD
*** WOOD DASH TRIM
AND MUCH MUCH MORE...
THIS CAR HAS GOT THE MICHIGAN REBUILT TITLE AND IS SOLD AS IS.
ANY VEHICLE INSPECTIONS MUST BE DONE BEFORE AUCTION ENDS.
WE CAN HELP YOU GET THE CAR SHIPPED TO YOUR DOOR.
IF YOU HAVE ANY QUESTIONS OR CONCERNS PLEASE CALL (734) 747-0847.
THANK YOU AND ALL THE BEST.