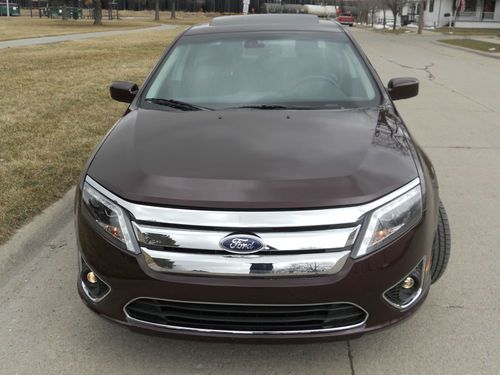 Condition: Used: A vehicle is considered used if it has been registered and issued a title. Used vehicles have had at least one previous owner. The condition of the exterior, interior and engine can vary depending on the vehicle's history. See the seller's listing for full details and description of any imperfections. ...
YOU ARE BIDDING ON A 2012 FORD FUSION SEL IN EXCELLENT CONDITION!!BORDEAUX EXTERIOR WITH BLACK INTERIOR, INCLUDED HEATED DRIVER AND PASSENGER SEATING. ONLY 17,500MILES!! THIS FUSION IS POWERED BY 2.5 LITER ENGINE, GREAT GAS MILEAGE!!!
BLIND SPOT MIRROR SENSOR-BACK-UP CAMERA- SUNROOF-ETC...
THIS IS A NO RESERVE AUCTION WHICH MEANS HIGHEST BIDDER WILL TAKE THIS 2012 FUSION HOME!
INCLUDED IS ALSO A FREE HISTORY CHECK PROVIDED TO YOU BY AUTOCHECK AT NO COST TO YOU. IT WILL PROVIDE
YOU WITH THE VEHICLE'S HISTORY IN DETAIL AND LIKE I SAID IS FREE OF CHARGE. THE VEHICLE IS CURRENTLY EASILY
WORTH $21,000 BUT YOU WILL GET THIS VEHICLE (WITH NO RESERVE) FOR A MUCH LOWER PRICE.
WE OFFER COMPETITIVE SHIPPING RATES - PROVIDE ME WITH YOUR ZIP CODE AND I CAN GIVE YOU A QUOTE AT MY
EARLIEST CONVENIENCE!!
EXAMPLES INCLUDE, NY AREA- $400, FLORIDA AREA- $500, TEXAS AREA- $600, CALIFORNIA AREA- $700
**** VEHICLE HAS UNDERGONE A STATE INSPECTION AND WAS ISSUED A REBUILT TITLE WHICH IS AS GOOD AS A CLEAR
TITLE BUT WITH A SALVAGE HISTORY AND CAN BE TITLED ANYWHERE IN THE U.S OR CANADA.
*** REASON FOR REBUILT TITLE:  FRONT BUMPER, BOTH FENDERS,HOOD,BOTH HEADLIGHT,AND RADIATOR
COMPONENTS-(STRIPPED)
NOTHING ELSE! COSMETIC REPLACEMENT ONLY. WONDERFUL JOB DONE ON INSTALLATION, VEHICLE IS BACK TO ITS A+
FORM. -- NO DAMAGE AT ALL TO ENGINE, TRANSMISSION, FRAME, ECT. NOW READY FOR SALE, BACK IN GREAT
CONDITION!
-I HAVE PICTURES OF THE VEHICLE PRIOR TO REPAIR THAT I WILL GLADLY PROVIDE UPON REQUEST ---
PLEASE HAVE FINANCE READY PRIOR TO BIDDING. I WILL PROVIDE A 6-MONTH POWER-TRAIN WARRANTY(EXTENDED
WARRANTY AVAILABLE) FREE OF CHARGE TO GUARANTEE CUSTOMER SATISFACTION.
ANY QUESTIONS REGARDING THIS VEHICLE, PLEASE DO NOT HESITATE TO CONTACT DANNY AT (313)622-1838
GOOD LUCK AND HAPPY BIDDING!