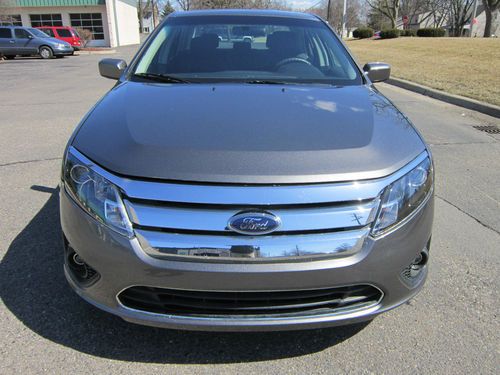 Condition: Used: A vehicle is considered used if it has been registered and issued a title. Used vehicles have had at least one previous owner. The condition of the exterior, interior and engine can vary depending on the vehicle's history. See the seller's listing for full details and description of any imperfections. ...
2012 FORD FUSION SE
ONE OF THE BEST CARS IN THE ENTRY LEVEL SEDANS, THIS 2012 FORD FUSION COMES WITH VERY SHARP AND CLEAN LOOKS AND DRIVING PERFORMANCE. IT HAS A CLEAR TITLE AND HAS BEEN INTO ONE ACCIDENT BEFORE. WE HAVE FIXED THE FRONT BUMPER, HEADLIGHTS, HOOD, PASSENGER SIDE FENDER AND VEHICLE IS BACK INTO THE FORD FUSION SHAPE. DRIVES 100% AND STILL UNDER FACTORY WARRANTY. VEHICLE COMES LOADED WITH OPTIONS LIKE:
- POWER DRIVER SEAT
- 17 INCH ALLOY WHEELS
- PROJECTOR HEADLIGHTS & FOG LIGHTS
- CONTROLS ON THE STEERING WHEEL
- KEY LESS ENTRY
- POWER WINDOWS, MIRRORS, LOCKS
- AM/FM/CD,AUXILARY
- 2.5 LTR 4 CYLINDER ENGINE
- AUTOMATIC TRANSMISSION
THIS IS A NO RESERVE AUCTION, PLEASE MAKE SURE FUNDS ARE READY BEFORE BIDDING.
ANY VEHICLE INSPECTIONS MUST BE DONE BEFORE AUCTION CLOSES, IF ANY OFFERS THEN PLEASE CONTACT US.
WE CAN PROVIDE BETTER SHIPPING RATES TO GET THE CAR DELIVERED TO YOUR DOOR.
THERE IS NO ADDITIONAL WARRANTY & VEHICLE WILL BE SOLD AS-IS.
VEHICLE DOES HAVE REMAINING FACTORY WARRANTY.
PLEASE CONTACT US FOR ANY FURTHER QUESTIONS OR CONCERNS @ 734-747-0847.
THANK YOU!