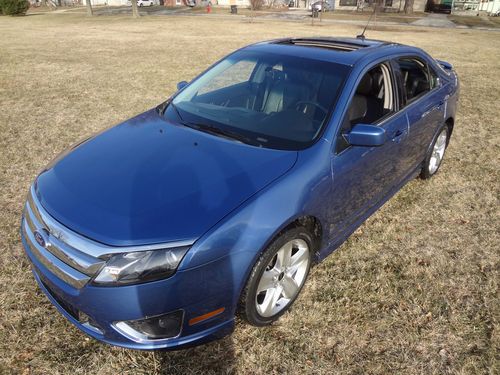 Condition: Used: A vehicle is considered used if it has been registered and issued a title. Used vehicles have had at least one previous owner. The condition of the exterior, interior and engine can vary depending on the vehicle's history. See the seller's listing for full details and description of any imperfections. ...
2010 FORD FUSION SPORT
WOW!!!
YOUR BIDDING ON A 2010 FORD FUSION SPORT, 34K, 3.5L ,SPORT BLUE CLEARCOAT METALLIC EXTERIOR, BLACK LEATHER INTERIOR WITH WHITE STITCHING, SYNC HANDS FREE SYSTEM POWERED BY MICROSOFT,
BACK UP SENSORS, MOON ROOF,REAR SPOILER, 6 SPEED SHIFTABLE AUTOMATIC, DUAL EXHAUST, POWER DOOR LOCKS, WINDOWS AND MIRRORS, 18'' ALLOY WHEELS,  CD PLAYER , CONTROLS IN STEERING , FOGS,  MANY MORE OPTIONS TO LIST........
NO RESERVE_ HIGHEST BIDDER WILL WIN
THIS FORD FUSION CAN BE TITLED IN ANY STATE OR CANADA
THIS FORD FUSION RUNS, DRIVES AND LOOKS GREAT--- PERFECT!!!!
POWERTRAIN WARRANTY IS AVAILABLE
I HAVE IT LISTED LOCALLY FOR  13,500.00 OR BEST OFFER__ PLEASE CALL ME WITH ANY REASONABLE OFFER 313-220-8900
WE TAKE PRIDE IN OUR WORK WITH NO SHORT CUTS- OUR FEEDBACK SPEAKS FOR ITSELF. WE OFFER THE CLEANEST CARS ON EBAY (YOU CAN'T TELL THE CAR HAS BEEN TOUCHED)
REASON FOR A REBUILT TITLE: WE REPLACED THE HOOD AND FRONT BUMPER- WE ALSO REPAIRED THE  RIGHT FENDER AND BLENDED THE LEFT FENDER  TO ASSURE 100% PAINT MATCH-- NO ENGINE, TRANS, FRAME OR SUSPENSION DAMAGE.

KELLY BLUE BOOK SUGGESTED RETAIL VALUE IS $19,799.00
PLEASE ANTICIPATE A FEW EXTRA MILES (TEST DRIVES) THANKS FOR UNDERSTANDING
WE OFFER COMPETITIVE SHIPPING RATES- PROVIDE ME WITH YOUR ZIP CODE AND I CAN GIVE YOU A QUOTE
STARTING PRICE IS NOT AN ASKING PRICE- HIGHEST BIDDER WILL TAKE THIS FUSION SPORT HOME
PLEASE HAVE FINANCES AVAILABLE BEFORE BIDDING
FEEL FREE TO CALL US OR EMAIL US WITH ANY QUESTIONS OR OFFERS-
I RESERVE THE RIGHT TO END MY AUCTION UP TO 12 HOURS BEFORE END OF AUCTION.
I CAN PROVIDE YOU A 15 DAY TEMP TAG TO DRIVE THE CAR BACK HOME
WE PROVIDE PICK UP FROM DETROIT METRO AIRPORT OR TRAIN/BUS STATIONS
THANKS AND GOOD LUCK WITH YOUR BIDDING---
GOD BLESS
KIKO 313-220-8900