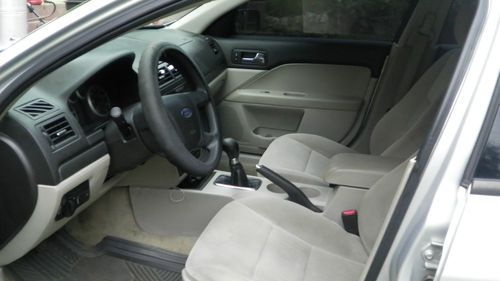 Condition: UsedA vehicle is considered used if it has been registered and issued a title. Used vehicles have had at least one previous owner. The condition of the exterior, interior and engine can vary depending on the vehicle's history. See the seller's listing for full details and description of any imperfections.Seller Notes:"Small ding in black trim between windows on passenger side. Small scrapes on bottom of front bumper"

I have a 2006 ford fusion s for sale. It is in great shape with 106,000 miles, still a daily driver so that will go up some. Got a truck and need to sell this to pay for the truck. We were getting around 30 m.p.g. with the car. It has a manual five speed transmission that shifts great and the engine runs good and it is the 2.3 four cylinder. It also has a new battery and new west Virginia inspection. It has the small ding between the windows and the front bumper bottom corners on each sides have curb spots. The car is overall in very good condition as is the interior. It is grey and black and looks great and is very clean. The blue book for the car is around $5,500.00. The reserve is set less than less and due to the great gas mileage it should sell quick so bid accordingly. Thanks and good luck