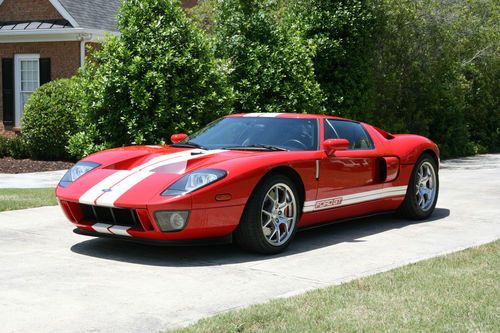 This is one of the last built Ford GT's.  The car is 100% stock; no modifications have been done. It is red with white stripes and has all 4 options:

When I bought the car I had the front covered with clear bra so the paint is real nice. This past year I removed some of the clear bra that wasn't needed. I also put an aux cord on the radio so you can hook up an MP3 player, iPhone, or Android phone to play music. That can be removed in a few minutes if you don't want it.

I've owned this 2006 Ford GT since new and have all the books, service records, original buyers contract, window sticker, car cover, charger, and air compressor.  It will come with everything I got when I picked the car up from the Ford dealer.

No wrecks, no stories, no problems. This has been the most reliable exotic car I've ever owned and is the most fun to drive.  We need the room in our garage or we wouldn't ever sell it.

We have the car detailed on a regular basis and since its been driven there are no bugs to work out or dry rot to worry about. Plus, you can actually drive and enjoy this Ford GT without worrying about loosing a lot of money by putting miles on it.  If you buy one with under 10,000 miles you will lose a lot of money when you drive it.

The only thing that needs attention is tires. I would have replaced them, but I wanted to leave it up to the next owner because there are a lot of tire options to choose from. The stock tires are nice, but you can also put wider tires on it if you want.

Fly into Atlanta and drive it home! You won't be disappointed!