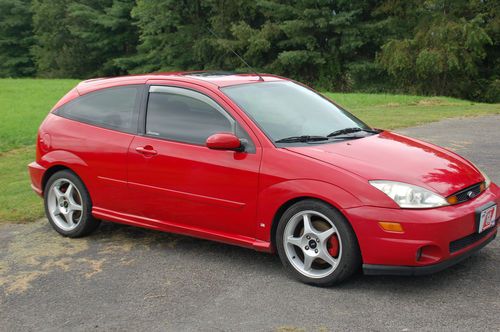 What we have here is a fine running SVT Focus.  It has all the options NADA lists for the SVT plus the audiophile stereo that includes a 6 disc DC changer and a power sunroof that does not leak.  No dents, no rust, no mechanical problems.  All the options operate as they should.  No problems with the CV joints, it shifts as it should.  If you are familiar with the SVT you know that this car has substantially more performance than a regular Focus.  Build quality is also much better than the next generation Focus.  This is the second engine in this car.  The first had a bad main bearing.  Replacing the engine was about the same as a rebuild so I had a used engine put in with almost exactly the same mileage as the car, so the 104K miles is accurate for both body and engine.  I had a new clutch and timing belt installed when the engine went in.  I've driven it for just a little less than 10,000 miles since the install and all is as it should be.  Overall the car is in nice shape with no body damage.  It was a southern car so it has no rust.  The breaks are good, the tires also have about 10,000 miles and are in very good shape.  The steering is tight, the whole car is tight.  The reason for selling is that I have way too many toys and I need to thin the herd.  The car is currently located in southern West Virginia but was in southern North Carolina before this.  The worst thing about it is the flaking clear-coat on the bumpers.  The rest of the paint is good.  The hatch release on the dash works about 50% of the time, but the releases on the remotes always work.  NADA clean trade is $4,450, retail is $6,550.  My reserve is somewhere in between.  Since this is for sale locally, I reserve the right to end the auction at any time.  Of course shipping is at the expense of the buyer.  I will assist with loading but the buyer must make all arrangements.