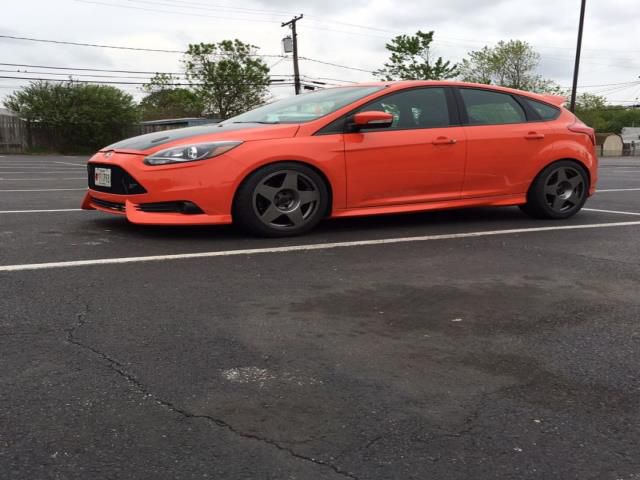 Up for sale is my pride and joy; a 2013 Ford Focus ST. The car has been extensively modded with virtually no area left untouched. It is a blast to drive, putting down 350hp to the wheels (thats more than the new Focus RS has at the crank). She recently took home top honors at Focus Rising 2016 (one of the largest focus and fiesta shows in the world) and she turns heads wherever I go. All the work was done right and with quality parts, no cheap stuff here. The car was recently repainted (less than 5000 miles ago) receiving a full color change in Ford Competition Orange. True Colors Collision did all the paint and body work. Again, no corners were cut here, the car was completely disassembled and repainted so all the door jams and such match. As far as I know this is the only third generation Focus ST this color in the world.The wheels, tires, and upgraded turbo kit were all put on after the new paint job so theyre all still pretty fresh. The car was professionally tuned by Dead Hook Motorsports, theyre one of the top ecoboost tuners in the country. The car has tons of power with almost no lag, but it is still composed enough to be driven daily and get over 32mpg on the highway. There are only two flaws with the car, the first is a small chip in the windshield, I had it repaired the day it happened and safelite guarantees it not to crack further but it is still visible. The passenger side seat also needs the occupancy sensor replaced. If the buy it now is used I will have these issues fixed immediately. If you have any questions do not hesitate to ask, and if you are local (DelMarVa area) I will gladly take you for a test drive. I will be driving the car until it is sold so the mileage may increase & the car is for sale locally as well. There is still a small balance on my loan, but my loan company has assured me that there will be no delay in receiving the title once it is paid. Mod listMotor: 347whp (dynojet)Apv3 tuned by Dead Hook MotorsportsDenso itv24 plugsFull race intakeEfr 6758Full race charge pipesCustom FMICMountune recirculating valveFull race down pipe w/defoulerCustom 3 exhaust with borla mufflerCPE rear, drivers & passenger motor mountsBreedt short shift armSolid shifter base bushingsNTC shifter cable bushingSuspension/ brakes:Vogtland coil overssteeda rear sway bar(with upgraded brackets)Massive rear end linksTB performance traction bar and strut tower braceWilwood 6pot front calipersStop tech slotted rotors and stainless brake linesHawk rear padsWheels & tires:18x8.5 fifteen52 tarmacs245/40/18 Nitto nt05Misc.:Seibon carbon hood w/aero latch pinsCustom leather/alcantara interior (titanium seats, door panels, shift/E brake boot)Carbon shiftknobPioneer app radio w/ infinity speakersTriple R front lip (waiting to instal until sold)Ford Zetec S rear valanceFull paint job in Ford Competition OrangeEngine cover and center caps hydro dipped carbonCustom Powdercoating on wheels and intakeEagle eye headlights