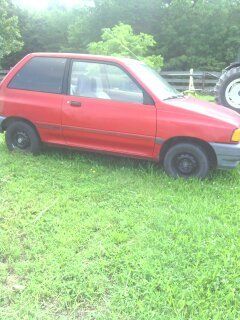 Condition: UsedA vehicle is considered used if it has been registered and issued a title. Used vehicles have had at least one previous owner. The condition of the exterior, interior and engine can vary depending on the vehicle's history. See the seller's listing for full details and description of any imperfections.Seller Notes:"2 new rear tires, no exterior rust great shape, motor ticks until it gets warmed up, needs exhaust"

dent behind driver door, two new rear tires, needs exhaust, new timing belt & tensioner, motor has tick but it stops when warmed up. just don't have time to mess with it