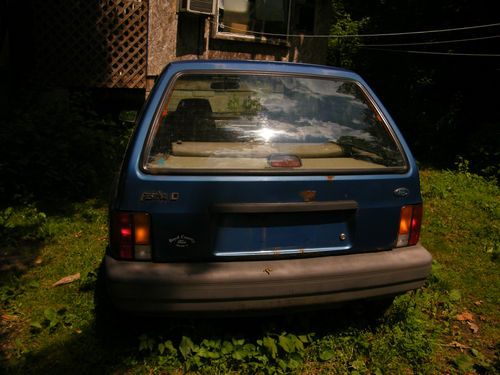 This Festiva is being sold for PARTING OUT because of rust issues.


The Festiva engine is a Mazda B series noninterference engine, (if the timing belt breaks, no harm is done to the engine).


Has an automatic transmission which we never had issues with.  Since we owned it, we did have the fluid and filter changed in it.


Gets approximately 35 miles per gallon.


Has A/C but we never got around to fixing it.


It has the original back compartment cover.

The tires are all good and still inflated, not flat.

All the locks work.

No cracks in windows.

We changed the calipers and rotors, but it has been sitting for 3 years.

The engine needs valve cover gaskets, they are oily.

The struts and springs on front are bad, axles possibly are bad also.

There is rust issues and mold on the inside.

We had  this Festiva on the road for 6 years, with no mechanical issues.   But, something
developed possibly, electrical we couldn't seem to run out and find.  It got so that it would start and run fine, and then quit and would not start back up.  Our garage mechanics could not fine the issue.

We changed the air filter, pcv valve, plug wires, distributor cap, rotor, fuel filter, fuel pump, but the problem still persisted.  We now suspect that possibly the issue might be in the ignition control module in the distributor.

After towing it to several mechanics, we just gave up and sadly one of the windows got left open without us knowing it and it got wet inside and got moldy.  We open the hatch to let it air out as much as possible and it seems to smell a bit better.

It does have a new battery but it needs a slow trickle charger to bring it back up.

We kept the car until now to take parts of it to keep our aspire on the road, but now we found another aspire to drive and will use the old aspire now for parts if we have to, so this needs to go and we also had to buy another car to which we are making payments on to basically replace this car.

This car is very rusty, especially underneath, but the engine, transmission etc are all good.

It isn't roadworthy, so you will have to bring a hauler to haul it off, even if it was up and running, it's too rusty underneath to trust out driving now.

Will load up more photos of under the hood later when I get the chance to take them.