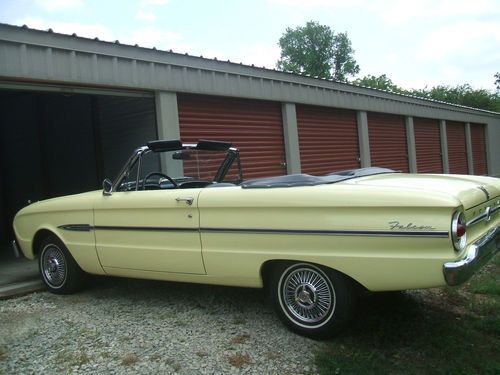 this 63 falcon is the best quality I have seen, it is reported to be 22k actual miles, spending many years in storage, in calif, and indiana, and tulsa, ok, where I purchased it. I have no way to document the mileage. just saying what the previous owner said. he was suppose to know the history. have some paper work from the sixties, but nothing with mileage, except when car was purchased. the car runs and drives , and stops great. everything works,  the motor is a 170 special, and fordamatic trans.   ,all the heater control knobs that you pull for defrost, and heat, that on most cars, are hard to pull, or locked up, these work as should, all knobs are either new, or mint originals, including the tran lever knob. the parts that are new are fuel pump, and he gave me the original with the ford tag, new gas tank and sender, (not the cheap china one).fuel lines, carb kit. new springs all the way around, leafs and coil, new brakes, wheel cyls, lines, and master cyl. still has the generator, and he gave me another one, suppose to be the original, he put on new shocks, the ones that came off were the original ford ones.  new door panels, front and rear, (sure are shiny with all the chrome inserts) new carpet, not sure if trunk pad is new or original, but looks new. new convt boot, still have the box. the dash paint is black and shiny, as new.  the windows are all in good condition, roll up and down. the top is new, just been down maybe 3 times. I just purchased off ebay a set of the wire spinners, that were optional to this car, they are an excellent set, paid almost 400$ to get them here. (the pic I took was off center, my camera the screen is out) but the spinners are as new also. the  bumpers, you can tell the chrome is getting thin, but they still wax up nice, and are straight, with no dings.some of the other chrome has a patina to it, but no pitting, except the fender spears has some. this car was original with back up lights, and I have the set of lenses that were on it, with the back up lights, the previous owner liked the others better.the paint on this car is shiny, and has no door dings, or scratches, this car is rust free, never had any, the paint is so good, that I drive it weekly, and keep it in storage, suppose to have never seen rain in 40 years. when I go somewhere, park it as far away as possible, so no door dents. it really is as new paint job. I have a few extra parts that go with it. going to take it next week for a under hood detail, all is clean and neet under there, just needs new stickers, which I bought, and maybe new paint on the air cleaner. the tires look like new, but suspect they are older, although no weather checking on them, this is a 4 lug 13" wheels, almost forgot, it does have a power top that works right. I have the original radio, he put this one in, has a good look and is fm, he also put in a new speaker, plus new kick panels with a speaker built in each, so you can hear the tunes with the top down, their is a cig burn in the drivers seat, from many years ago, I may have a person to put in a new panel, if needed, probably  forgot a lot, send me questions, need a 500.00 deposit within 48 hours, and the balance in 7 days