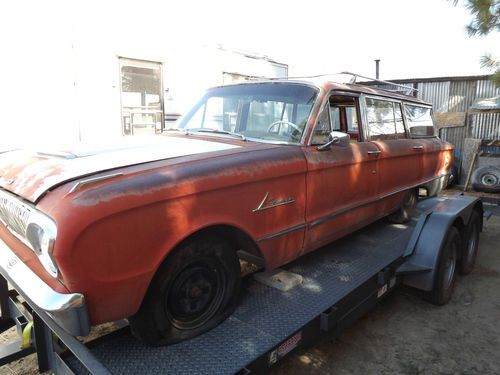 1962 Ford Falcobn stationwagon. Will make a great parts car. Take a good look at photos. All glass is good and in nice condition, window door stainless very nice condition, the dash complete and knobs are not crystalized and broken. Chefck out t6he luggage rack, won't find many this nice and complete. The car is all there front to back, top to bottom. Rust you can see in photo's, this is not for the amature to restore, but easily rat rod. Car was running when parked in 1998, I put battery in, lights, etc all worked, but starter wounld't engage. The motor is free, you can turn it by hand and should be made to run. No drivers seat, but will supply a nice one from a 2 door falcon .

Will sell to over seas, all payments must clear befrore transport. Transport at buyers expense, will help load at my location.