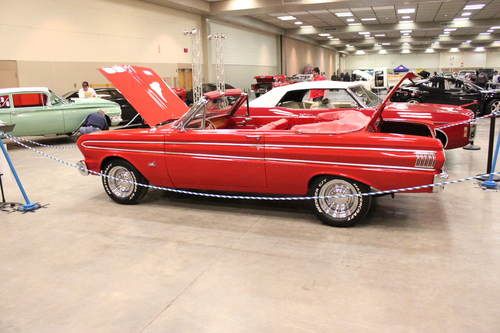 1964 Ford Falcon Futura Convertible.  As far as I can tell, this car has approximately 60500 miles but the title cannot confirm this.  This car was rust free when we began and the only non original panels are the hood and passenger side front fender.  It was bought by a "little old lady" in 1981 from Arizona and she brought it to South Dakota.  After she passed, it went to her son and he began the restoration but never finished.  It was last licensed in 1994 before we bought it.  The son added a 1958 Ford 9 inch rear end before we purchased it.  It now has a Granada disk brake conversion on the front so it does have 5 lug wheels.  EVERYTHING on this car has been gone through.  Brakes, suspension, gaskets, plugs, wires, belts, water pump, gas tank, sending unit, fuel pump, heater core, lights, exhaust, seals, wheels, tires, and carb are all new.  (BASICALLY EVERYTHING)  This car is SWEET!  Power top works great, custom dash and door panels, reupholstered interior, and new carpet.  Chrome is all original but in very nice shape.  Body was stripped to bare metal and even the engine cavity was blasted and painted with base clear!  This is a factory original red convertible with red interior and a white top.  This was a ground up resto that we worked on for over a year and a half.  I reserve the right to end this auction early as the car is for sale locally.  If you have less than 5 feedback, please contact before you bid.  If you have any questions, please call 605-490-1950.