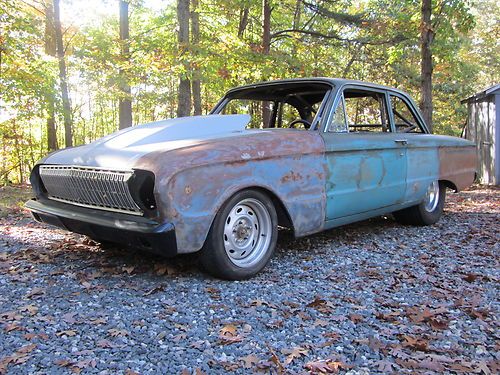 Up for your consideration is my 62 Ford Falcon Pro Street Project.  I got the car from my in-laws with plans to finish it out, but I have other projects I would like to get to so this one needs to go.  It has a Pro built (18K in receipts) chassis which consists of square tubing from the front that joins to round tubing at the firewall.  Roll cage is swept at the doors for easy in access.  Also has really nice sheetmetal work as well.  It is set up for a small block Chevrolet and 400 turbo.  It has a 9 in Ford in the rear and a 3-link rear with coilovers at all 4 corners.  Mustang 2 front end with manual steering.  Also has disc brakes all the way around.

Good used trunk with no rust (one dent)

Good front fenders with a little surface rust, no "rot through"

I am sure there are some things I am forgetting.  The car has had rear quarters installed and the only other rust aside from just light surface rust from sitting in my garage is a little at the upper firewall under the top of the front fenders.  The car is set up really nice and I am taking a major hit at my reserve price.  I have around 25K in the car like it sits and all the work up to this point is very nicely done.  Dave Hunt Racecraft here in Virginia did all the work on the chassis and frame.  The front bench seat was also shortened to fit inside the door bars.  I do not have any of the glass other than the glass that is in the used doors and I have not checked their condition.  This is a great start to a nice Falcon and I am sure the buyer would be very happy to own it.  I just don't have the time to finish everything I have going on right now.  Any questions at all please ask them and I would prefer the buyer come take a look at the car to see what they are getting.  Thanks for looking.  Clear title on the car as well.