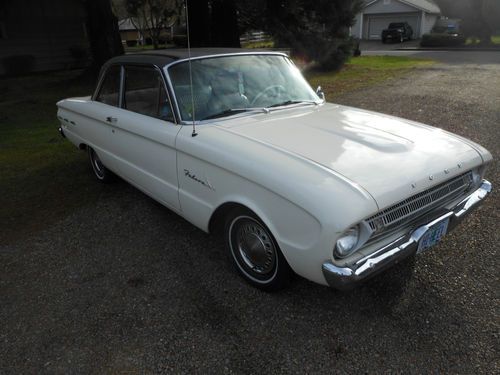 1961 ford falcon futura, 2nd owner.has 302 auto, new dual exhaust. Was original 6 cylinder. 4 lug rims, Under hood is very clean. Body is all original. Good windows. good chrome. Very straight. wiper motor not working, everything else works great All interior is original seat seams are ripping due to age. But otherwise interior is in good condition. This was a grandma's car. She passed so I got. Runs and drives GREAT!. Don't pass up the beautiful car that has man power!!! this car is rust free, only very little surface rust,i have 3000 in paper work for motor trans and other stuff.i will not reply to people that ask for more pics,they do not bid,

Serious Bidders/Buyers Only.  No bidders with 0 feedback please.

PAYPAL ONLY, NO EXCEPTIONS

YOU BID, YOU WIN, YOU BUY. DEPOSIT IS NON-REFUNDABLE.