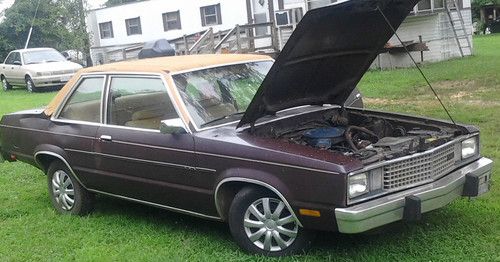 Condition: UsedA vehicle is considered used if it has been registered and issued a title. Used vehicles have had at least one previous owner. The condition of the exterior, interior and engine can vary depending on the vehicle's history. See the seller's listing for full details and description of any imperfections.Seller Notes:"6cyl, 3 speed manual, car is kinda rough but still runs and drives ,has damage on the passenger rear quarter and a fairly large gouge under the rear passenger quarter window and some rust on the drivers rear quarter."

6cyl, 3 speed manual, car is kinda rough but still runs and drives ,has damage on the passenger rear quarter  and a fairly large gouge under the rear passenger quarter window and some rust on the drivers rear quarter.

manual windows, manual brakes, manual steering,  runs and drives  has 79k on it. this is a base model car, doesn't even have a radio.