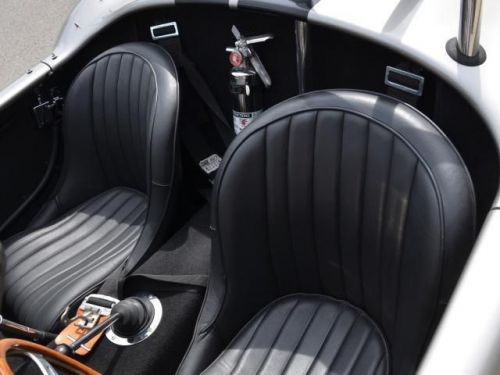 1965 (2003 Build) Superformance Cobra (AC Mark III Replica) featured here in Silver w/Black stripes w/Black interior. This is a one owner heavily built car. Engine is a 418 Stoker motor with a Ford 351 Windsor block (1971 casting # D1AE-6015 DAS serial # 1b106482) built by Performance Engineering in Ress Ohio. It has Competition Cams and AFR Airflow Research heads, MSD ignition, and a Demon double pumper 4bbl carb. This is a factory built car not a kit car. Full independent rear suspension (IRS). Transmission is a Tremec five speed (3.27 first gear), a Center force clutch, and Lakewood Safety Bell housing. Car has been dynod at 535hp which is documented. These are true knock off wheels. All books and records are present with car. It is titled as a 1965. This is not one of the early cars and does have the removable glove box and upgraded wire harness for easier maintenance. Hard side windows, top, and windshield winglets are included. Test drives available with approved financing. Finance/Lease options available for US customers. We ship anywhere in the world. Our approach and objective is focused on building long-term relationships with our clients to serve as a valuable partner they can leverage over time to both find and sell high-line vehicles at a significant time and cost advantage. We strive to earn your trust and repeat business by serving as an advisor and exceeding your expectations with exceptional service and support.