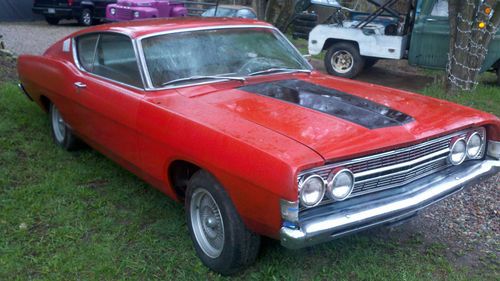 Condition: Used: A vehicle is considered used if it has been registered and issued a title. Used vehicles have had at least one previous owner. The condition of the exterior, interior and engine can vary depending on the vehicle's history. See the seller's listing for full details and description of any imperfections. ...
1968 FAIRLANE 500 FASTBACK, 302 WITH AUTOMATIC TRANSMISSION. BEAUTIFUL MUSCLE CAR PROJECT. RED PAINT IS JUST SPRAY PAINT. BODY IS AMAZINGLY STRAIGHT, WITH SOME RUST ON THE REAR PASS QUARTER. GLASS IS ALL PERFECT. STARTS RIGHT UP, STOPS, AND CAN DRIVE ONTO A TRAILER WITH NO PROBLEM. SEATS ARE REUPHOLSTERED AND HAVE NOT BEEN USED. HEADLINER NEEDS REPLACED. BUMPERS ARE IN GREAT SHAPE AND I HAVE MOST IF NOT ALL CHROME AND INSIGNIAS. CAR SOUNDS GREAT. CLASSIC 1959 GMC  TOW TRUCK ALSO FOR SALE.  CHECK OTHER EBAY LISTINGS.  THANKS FOR LOOKING.