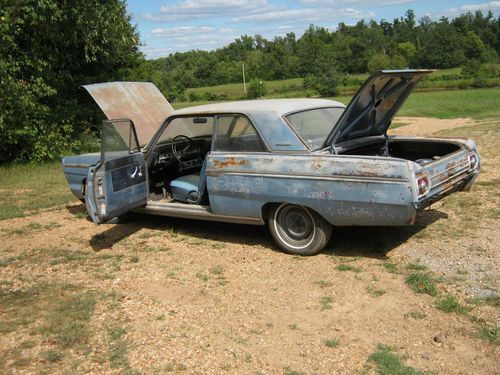 HERE IS A REAL FIND, this little coupe was littly found in a barn, this is a factory FORD hang down air can, has oringal factory 289 motor that will start and run, with hot wiring, has no key, does have trunk key, It is showing 17830 miles on speedometer form your own opinion. the glass is good front and back no chips or crack, the driver door glass is good, passenger glass was broke out, the seats are remarkley good for the year no tears or rips carpet needs attention, head liner is good, dash is in good condition,glovebox door is there and it works,                   IVE tried to tell u everything I know about this car that I know im sure ive missed something.  oh yea no front or back bumper have know idea where they are weren't in barn.  feel free to email me with your questions. this car is for sale locally will stop auction if car has no bids and sales locally thanks for looking at my item.