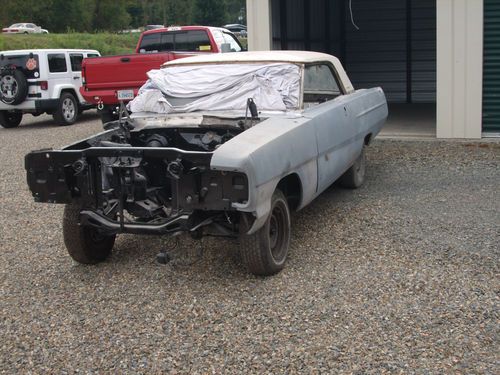 1965 Ford Fairlane 500, project car. I am selling this for a friend of mine who had a stroke and cannot finish the car due to health problems. This is a great start at building an awesome car. Most of the hard work has been done including new floor pans, trunk floor, and lower quarter panels professionally welded in. The engine compartment has been stripped and painted with base coat-clear coat. The original 289 was professionally rebuilt, balanced and bored .030, with all new parts, 10:1 pistons .480 lift cam, GT40 heads, new Edelbrock intake, new Edelbrock 600 carb.,new MSD distributor, new chrome alternator, new Ford Motorsports valve covers and plug wires, new billet pulley kit, new ceramic coated headers and new aluminum radiator with fan and overflow jug. Brand new C4 trans rated at 550 HP with 2800 stall converter. All new 8" 3.55 positrac rear end. New stainless prebent brake lines and fuel lines, new wheel cylinders, brakes, springs, master cylinder, booster and shocks. For the interior, there is new carpet, floor mats, scuff plates and headliner. The original seats and door panels are in good usable condition with no tears. All new weatherstripping. New gas tank and straps. New emblems, lettering, locks and ignition switch. Everything is included to put this car back together including all body parts and trim. New paint is also included, 1 gallon Dupont Vermillion Red basecoat, 1 gallon- Show car clear, and 1 gallon urethane primer. That's over $800 worth of paint! The parts alone cost more than his asking price!