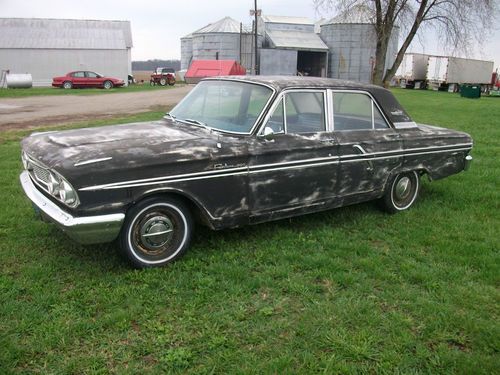 hello up for bid is a 1964 fairlane 500 4 door sedan . this car starts runs and drives great. It starts and idles like a pickle seeder. The transmission and brakes work well . The radio plays , the fan blows and horn work all gauges and indicators work even the gas gauge! This car is in fantastic shape for its age . the doors open and close very nicely , very solid .It has an inline 6 engine that I think is a 200 cubic inch but not positive the car shows 49xxx miles on it , I cant verify that is correct but I wouldn't be surprised if it is . I bought the car last fall to use as a parts donor car for a thunderbolt clone project but the car is way to nice to part out .the interior is super nice for its age as well .the dash has a few cracks and the carpet is faded . The previous owner had used it daily driver until he took a job out of town and bought a newer car . the car is very solid exept for the floorboards and the bottom of the front fenders. there is also rust above the rear wheel openings , the trunk looks very solid. It does have an exhaust leak ,it sounds like its coming from where the pipe connects to the manifold . I haven't messed with it though.  please look at the pics and ask questions call or text 765-918-8650 . the car can sit here for 1 year if needed for pickup please plan to settle within 7 days paypal deposit is preferred     thanks for looking and check my other auctions

the horn ring retainer has been ordered and will be installed as soon as it shows up!!