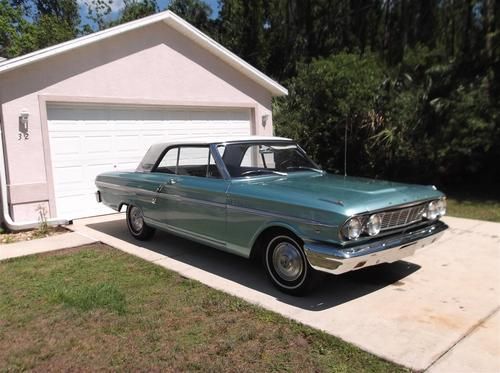 This is very nice 64 Ford Fairlane 500 two door hardtop.  This car is 100% original.  It has 90,150 original miles, and no rust.  It has the 289 two barrel motor with the 3 speed C4 automatic transmission.  The factory air works good.  I replaced the water pump, and had the roof repainted as it was painted laquer over enamel and was flaking off.  It was taken down to bare metal then base coat/clear coat Wimbolden white and looks fantastic.  Some of the body has the original paint, and other spots have been repainted the original Dynasty Green Metallic.  The original bench seat interior is in great shape as is the headliner.  I have installed a set of gauges and tach on a replacement dash vent insert, and have the original one I removed.  I installed an fm/cd player under the dash and replaced the orginal dash speaker with two 3" Sony speakers.  The original AM radio worked fine.  The original speaker will be included with the car.  The car drives down the highway at 70 mph perfectly.  The only issue with it is that it could use valve seals, as it smokes a bit when first started.  It does not foul plugs, and runs great.  Just being as honest as possible.  I have driven the car over two thousand miles since I purchased it, and drive it to shows regularly.  I originally bought it to hot rod it, install mini tubs, install big motor and 4 speed, but the car is so original and great condition, that I cannot bring myself to do it.  You can contact me by phone with any questions at 386 445 5129.  Car is for sale locally and will be removed if sold before auction end.