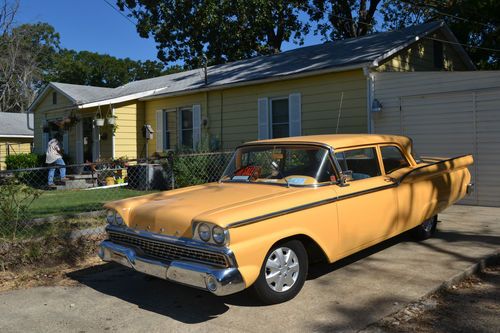 This auction is for a 1959 Ford Fairlane 2 door hardtop which is owned by my uncle. The car has a 223 6 cylinder engine and automatic transmission. It has 41,582 original miles.

Uncle has owned it for the last 20 years. In that time it has only been driven 2,000 miles. He has added power steering and air conditioning and both work great. Both front and rear bumpers have been re-chromed.

The car has been garage kept and has been driver very little the last few years. It drives and runs great and would not be afraid to drive it anywhere at anytime. The car has no rust and the body is very straight. The glass is in great shape and both wing windows open and close.

Uncle has spent thousands of dollars and hundreds of man hours on this car.

The car has a clear title. This is a good clean car just needs driven. Please feel free to ask me any questions that you may have on the car or feel free to call my uncle Buddy Midkiff at 501-624-3961. If no answer please leave a message.