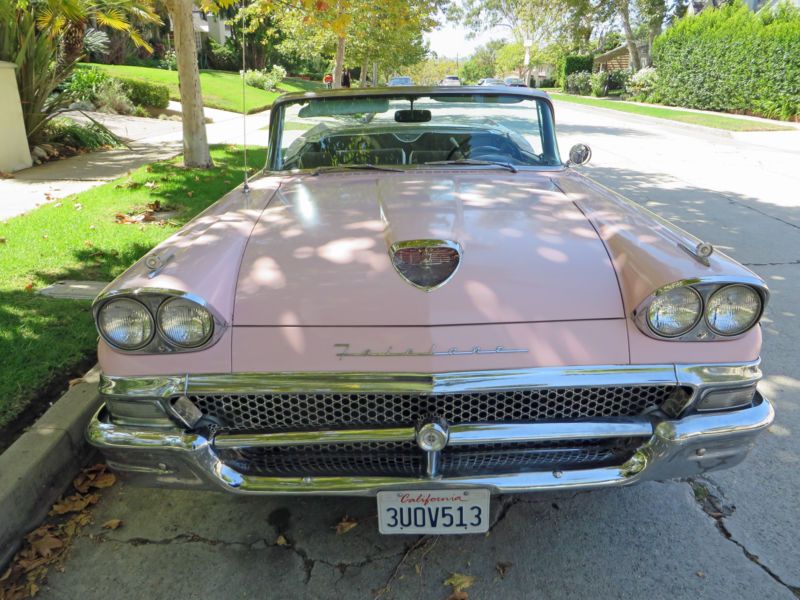 Here is a classic 1958 Ford Skyliner Hard Top Convertible available for sale. This pink & white Fairlane is in
terrific condition and ready to enjoy. Turn on the ignition, drop the power top and off you go! Car was fully
restored approximately 12 years ago (per previous owner) and has been used sparingly the last six years (and driven
less than 300 miles during that time).
It is believed to be a three owner car. Original owner was a mechanic. Car was purchased about six years ago as a
Sunday driver but current owner never really got around to driving this car. Professional and family obligations
took up most free time he would otherwise have had to enjoy the car.
Car has been properly maintained. Seats, door panels, headliner all in terrific shape. Seat belts installed for
five passengers. The car starts, runs and drives nicely and the factory hardtop works great*. Within the past few
weeks, car has received a tune-up, fluids flushed, hoses replaced, oil changed – the engine is mechanically
sound. As seen in the photos, both exterior and interior show very well.
*Upon inspection (and to the best of my knowledge), the chrome bumpers has some pitting and minor rust (nothing
serious that would deter me if I was a buyer). While the body/paint is in very, very good condition, there are some
minor rust spots – examples documented in the photos (again, if I was a buyer I wouldn’t be deterred). If you
were to stand five feet from the car, these imperfections wouldn’t be noticeable.
Car is an automatic with power windows, power steering and power assist brakes. Heating and radio works (no a/c).
Wipers do not fully operate (they will sweep the window one way but not come down). The clock, map and headliner
lights do not work. While the top goes up and down, it can be temperamental at the start. There are 1957 hubcaps on this 1958 model. Odometer works and shows approximately 79,500 miles. I would rate this
To summarize, while there are some items that need discretionary attention, this American classic Fairlane 500
Convertible is a great car for leisurely drives – a terrific boulevard cruiser to be enjoyed with the wife (or
hubby), kids or grandchildren that can also be used as a daily driver.