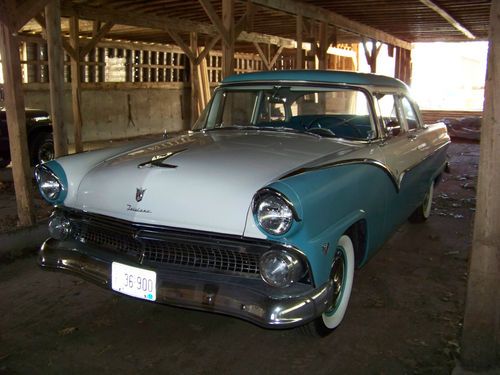 This is a 1955 Ford Fairlane 2 door in pretty darn nice shape...Drives wonderful down the road at 70mph.  It has new tires, new interior and many other updated parts.  Paint looks good from 20 feet, but is faded and worn from it's restoration years ago.  It has a Mass State title but is registered here in Maine right now.  She is powered by a 272 V8 and Ford-a-Matic transmission.  All exterior lights work...brakes are good and the car is generally mechanically sound....very nice Sunday driver or take it to the shows as is.  Please contact me for more information at 207-754-1045.  if you are local to Maine, feel free to come check it out and test drive it in person.  Note: the drivers side window is broken, but being replaced this week.  Click the link below for a youtube video too.

Shipping: contact me for a shipping quote, or get one yourself at the many sites on the web.  I would feel comfortable to drive this several state home too if you are up for a fun drive.