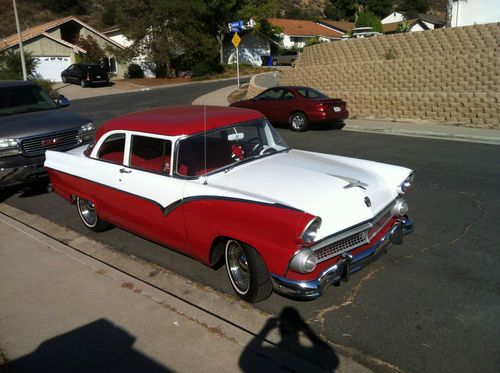 Condition: UsedA vehicle is considered used if it has been registered and issued a title. Used vehicles have had at least one previous owner. The condition of the exterior, interior and engine can vary depending on the vehicle's history. See the seller's listing for full details and description of any imperfections.Seller Notes:"She is not perfect and has some blemishes due to her being 58 years old. N0 ps, No pb, it has the original radio that does not work. The interior and paint are older restorations but definitely driver quality. The car is sold as is with no warranty. It is the buyers responsibility to arrange pickup of the vehicle once payment is received."

Selling my 55 ford fairlane as some unexpected circumstances have come up and i can no longer afford to finish her. She is not perfect and has some blemishes due to her being 58 years old. the engine has been gone through and is the original Y-Block V8 and Manual transmission. N0 ps, No pb, it has the original radio that does not work. The interior and paint are older restorations but definately driver quality. Recently replaced brakes, and other little odds and ends. I am asking 6,900.00 OBO. Cash or  certified cashiers check only and the car is sold as is. I am open to all reasonable offers.Travis 619-977-0363