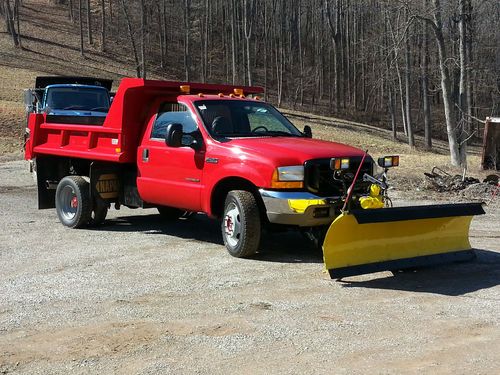 The truck was a local township truck and was purchased brand new by them, they are in charge of 33 miles of road and that is where the 69,318 miles where put on the truck. they were budgeted for new equipment this year and replaced the Ford with a current model year truck. The truck has been kept inside, when not being used, its whole life and was well maintained. The truck is equipped with a 7.3 Powerstroke, Automatic transmission and is four wheel drive with warn lock out hubs. It has 225/70R19.5 load range F tires with about 95% tread and dual rear wheels. The truck is a serious work truck and has heavy duty springs and helpers in the rear, as well as a universal 2 and 5/16 ball and pindle hitch. What makes the truck really nice is the Buckeye Truck Equipment Dump Body which measures 9 foot long by 6'10" wide and 1'10" deep to the top of the side boards, and has a regular dump tailgate as well as a sand and salt gate with a built in auger and a attached spreader all of which is controlled in the cab with multiple speeds. Another great feature is the Meyer 9 foot electric over hydraulic commercial plow. The Interior is in nice shape, it has a vinyl bench seat and rubberized floor mat. This truck is in good shape and ready to work today and if you know diesel you know that ONLY 69,318 miles is nothing for any diesel. Im a motivated seller and if you need any more information or have any questions feel free to call me at (614) 402-6143 Dean.